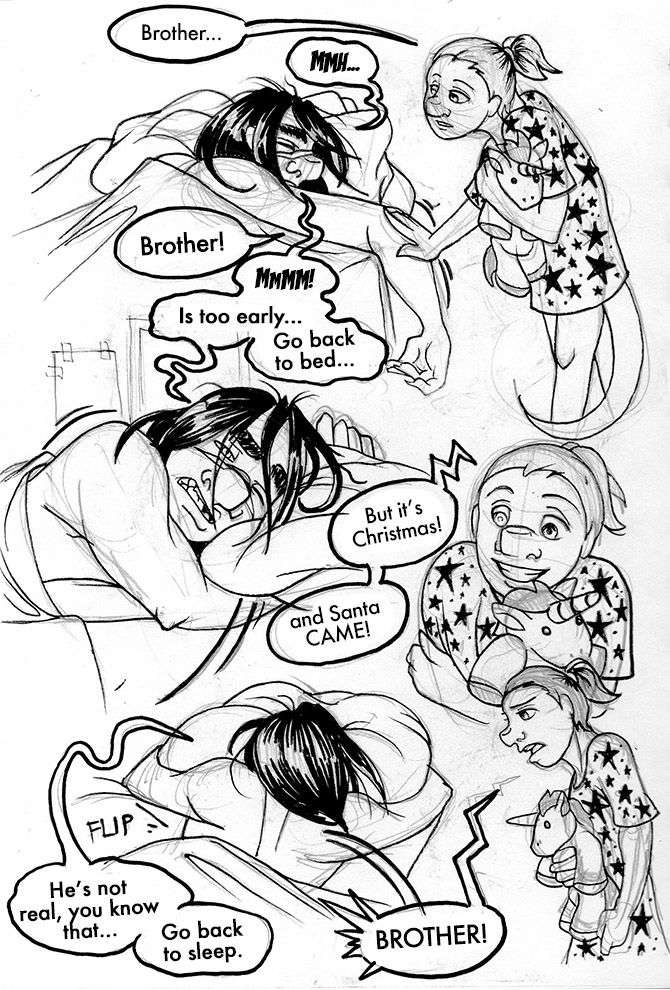 It was early. Surely too early to be awake. A bit of dawn’s light was creeping around the edges of the window, lighting the corners of the dark room and casting tiny shadows on the opposing way. It was quiet except for a soft creak of the floor…tiny footsteps making their way to the edge of the bed.

Eclipse felt a small hand shake his arm softly before he heard his sister’s voice.

He moaned a little in his chest, stirring slightly.

“Brother!” It was louder this time, and the shaking became harder.

Eclipse opened his eyes slightly, still half asleep. There she was, his little sister, dressed in a nightgown way too big for her tiny frame with her dark auburn hair pulled back into a pony tail. She stared down at him with her piercing blue eyes.

“But it’s Christmas!” she exclaimed. She clutched her unicorn tightly in anticipation. He recalled that it was the first toy she had ever been given, to comfort her when she had been ill. She hadn’t let it out of her sight since. “And Santa CAME!”

He paused for a moment, staring at her in disbelief. He then shook his head before turning away.

“Cecillia, he’s not real, you know that.” He flipped himself over to the other side of the bed, settling in and yawning halfway through his sentence. “Go back to sleep.”