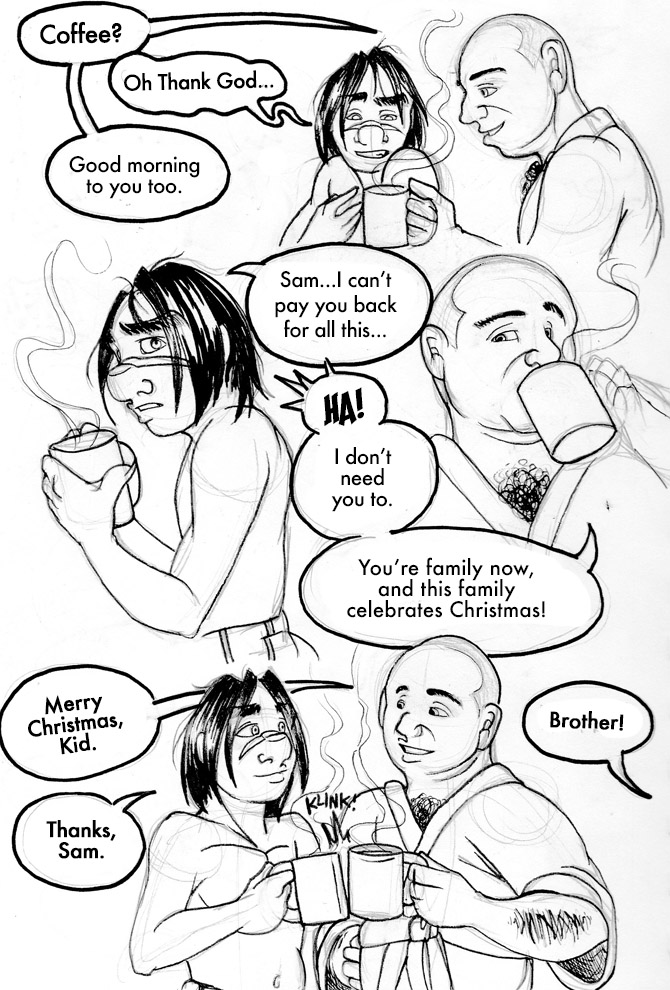 Eclipse yawned again, standing in the doorway as Cecillia took off running towards the gifts scattered across the floor. The glow from the Christmas tree illuminated the dim room, sparkling and shining off the neatly wrapped paper and bows.

Eclipse turned towards the voice. Behind him had appeared Sam with two mugs, one in each hand, of hot coffee. He was dressed from head to toe in a long, dark robe that tied over his belly and large frame, chest hair peeping out the top of the fold.

“Oh Thank God…” Eclipse muttered, reached out as Sam handed him a cup. He took a long sip as Sam laughed under his breath.

“Good morning to you too.”

The two stood together and watched as Cecillia pined over one gift after another, loving each one greater then the next. In a moment Eclipse came to a worried realization, and his features dampened. Sam noticed his pained expression almost immediately.

“Sam…” Eclipse finally spoke, softly enough so that his sister wouldn’t hear. “I can’t pay you back for any of this…”

Sam took a swig of his drink, chuckling.

“Ha! I don’t need you to.” His tiny eyebrow quirked, as it was known to do when he was pondering. “You’re family now, and this family celebrates Christmas! Tis the season for giving…”

“But, you’ve already given us so much!”

“And so have you both.” Sam stated, almost fatherly in his tone. “To me.”

Eclipse said no more. Sam grinned slightly at the corner of his mouth. He raised his cup so that the edge collided softly with the mug in Eclipse’s grasp with a soft ‘kilnk’.

As they both drank, they could hear Cecillia’s call for Eclipse’s attention from near the other side of the room.